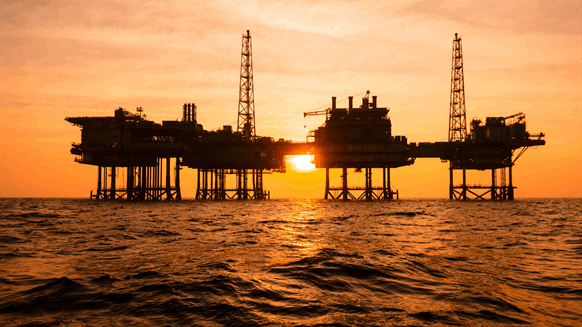 After years in the shadow of the U.S. shale patch, deep-water explorers see a revival coming.

(Bloomberg) — Offshore is ready for the limelight again.

After years in the shadow of the U.S. shale patch, deep-water explorers from Royal Dutch Shell Plc to Talos Energy Inc., along with contractors such as Ensco Plc and TechnipFMC Plc, told investors at the Scotia Howard Weil Energy Conference in New Orleans this week they see a revival coming. That was a stark contrast to a subdued outlook for shale at the event.

“The offshore recovery is under way today,” Jon Baksht, chief financial officer at Ensco, told investors Tuesday at the conference. “This isn’t something that we’re waiting for.”

While U.S. shale remains a global hot spot, with multibillion-dollar investment plans from supermajors Exxon Mobil Corp. and Chevron Corp., independent producers have been under pressure from investors to focus on delivering returns rather than ambitious growth plans. At the same time, after nearly half a decade of consecutive spending cuts, the offshore industry is expected to finally boost spending again to develop higher-gushing oil wells.

Hess Corp., which has assets in shale and in offshore, made the starkest contrast between the two basins during the conference when Chief Executive Officer John Hess showed a slide about what it would take to get the same amount of oil from the world’s busiest shale patch, the Permian Basin of West Texas and New Mexico, versus Guyana, one of the biggest discoveries of its kind offshore.

To suck out the equivalent of 120,000 barrels of oil a day, the Permian Basin would need a $12.8 billion investment compared to $3.7 billion for the first phase of the Liza section of the Guyana project, in which Hess is teaming up with Exxon.

Offshore capital spending has been cut in half since oil prices first started to fall in 2014. This year explorers and producers are expected to boost offshore spending 3 percent to $155 billion and another 10 percent next year, according to Ensco slides on Tuesday. That compares to a double-digit drop in spending in North American land this year, Schlumberger Ltd. and Halliburton Co., two of the biggest providers of oil services, told investors on Monday.

Tim Duncan, CEO of deep-water explorer Talos Energy Inc., considers himself a contrarian for wading farther into the Gulf of Mexico when others were flocking to the Permian, which straddles Texas and New Mexico.

“Investors are thinking about being basin-agnostic again, and that at least gives us the opportunity to reintroduce the Gulf of Mexico,” Duncan said Tuesday in an interview in New Orleans. “It’s allowing investors to just rethink under a new lens how they view offshore, and we have to take advantage of that opportunity.”

Fracking shale rock for oil and gas can be done in a matter of months. But it may take years to develop a deep-water area, and before any rigs can start drilling, governments around the world need to auction exploration and production permits. Those auctions have been more frequent lately.

“Take a look back from when we were at this conference one year ago today and we’re up 25 percent just in terms of the number of open tenders that are out there year over year,” said Baksht of Ensco, which is poised to become the world’s biggest offshore rig contractor if its merger with Rowan Cos. closes later this year. “We are seeing that increase in spending and increased activity in the offshore space today.”

So much so that for the first three months of this year, equipment maker TechnipFMC is expecting a quarterly record for inbound orders of subsea gear, an historical proxy for offshore activity because all wells away from land need the valves and pumps that sit on the seafloor.

The return to offshore activity is just a start, though. It’s not a full-fledged boom. There is still a glut of older, unused rigs keeping drilling contractors from having widespread pricing power for pushing up the rents on their vessels.

But for Diamond Offshore Drilling Inc. CEO Marc Edwards, simply hearing of spending hikes from other large explorers such as Equinor ASA and Petroleo Brasileiro SA was critical to realizing better days are ahead.

“Their exploration budgets are significantly moving north,” he said. “That’s the first sign of recovery we needed in the offshore space.”

Oil Will Continue to Play Significant Role in 2040  | Rigzone

Priciest Oil Auction Could Raise $50B in Brazil  | Rigzone